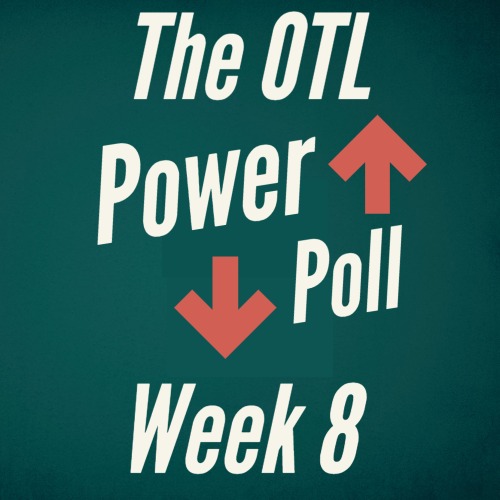 The next to last Power Poll of the season is out. There is some movement after last weeks game. Check it out by reading more.

Explanation: Colonel Richardson wins the Bayside 1A Championship for a second straight year with a second consecutive win over Cambridge after having not beaten since 2005 going into last season. With the win Colonel breaks the tie between both teams in the poll...Kent Island remains #1 with their win. The 'War on the Shore' is for the Bayside 3A/2A Championship with Queen Anne's win over Wicomico. With that win the Lions despite their loss to Easton have earned the right to leapfrog the Warriors into the #2 spot even though Easton defeated QA head to head. That loss was by two points and the Lions were a short FG away from victory, if the margin had been a lot greater than it would have been different. With wins over Decatur and at Wicomico they have handled the gauntlet of teams in the second of their schedule very well and are nearly 3-0...

...I don't like tying teams so I won't but I almost did and I still want to. As you will find out this is a coin toss between the teams really well almost. They are so similar.

-While Easton defeated Kent Island in Week 1, remember Decatur got Kent Island in just Week #3, not say Week #7 for instance. KI was still finding themselves in Week #3 and defeated Decatur on the road by 17.

-Both teams in their two losses have lost by a combined 33 points. Both teams are similar in points allowed (168-Easton, 156-Decatur) but in points scored (271-Easton, 227-Decatur), advantage Easton.

-Easton is 3-0 on the road, Decatur is 3-1. However for the Seahawks two of their three road wins were at Wicomico and at Easton. For the Warriors two of their three road wins were at Kent County and Parkside. The Hawks one loss was at Queen Anne's, a tough team and place to win. Decatur had one of the few non-conference games handily defeating Indian River out of Delaware who currently is 3-4 (easily could be 4-3) where Easton played 1A Kent County (2-6, one of the wins against winless and scoreless Washington) and I give the advantage there to Decatur.

-Decatur also has been starting a first year QB (even though he has been a backup the last two seasons, he has played WR) and has mixed in the sophomore backup, Easton entered the season with a 2 season starter. Both teams play a fair amount of young players or first year starters.

*There is your deep dive...It's fair if you say the teams should be tied but you deserve better out of me to take the easy way out so I won't. But what separates Easton at #4 to #3 or to #2 or #1 for that matter is extremely razor thin. The Warriors are a very good team and exciting. These top 4 teams have not made it easy...your feedback welcome at mike@shoresportsmd.com

*Some stats courtesy of Bill Hauffe and The Star-Democrat

1. Kent Island (7-1)-The Buccaneers won their 7th in a row, the longest in the Bayside with a 49-6 blowout win at home over James M. Bennett on Senior Day on Saturday. The Bayside 3A/2A Championship comes down to the Buccaneers and their rivals the Queen Anne's Lions in the 'War on the Shore' Friday night...Friday at Queen Anne's

2. Queen Anne's (7-1)-The Lions defeated Wicomico on the road 35-28 on Thursday night. KJ Smothers rushed for 309 yards and three touchdowns, and Ashton Siwald carried for 94 yards and a score. Queen Anne’s QB Devin Wright completed 5 of 6 for 69 yards and a touchdown, and Jai Roy had two receptions for 33 yards and a score. The Lions have set themselves up for a chance at winning the Bayside 3A/2A Championship with the 'War on the Shore' Friday...Friday vs. Kent Island

3. Stephen Decatur (6-2)-The Seahawks defeated Easton on the road 37-34 on Friday night in a thriller. Decatur's QB/WR Brycen Coleman was unbelievable as he had 3 catches for 14 yards before moving to quarterback, where he went 14 of 26 passes for 214 yards, a touchdown and an interception, and carried 17 times for 156 yards and three touchdowns, including a 10-yard scoring run that put the Seahawks ahead with 3:28 left and would hold on to win. Duke bound Luke Mergott had five receptions for 92 yards and a touchdown, scored a touchdown on his only rushing attempt, and made a slew of tackles from his defensive end spot...Thursday vs. Snow Hill

4. Easton (6-2)-The Warriors fell to Stephen Decatur 37-34 at home on Senior Night in a fantastic game. Warriors QB Kevin O'Connor (Duke) was 18 of 39 for a season-high 333 yards, three touchdowns and two interceptions, rushed for 48 yards, a touchdown, and a two-point conversion, and wracked up his share of tackles on defense. Easton senior wideout Jordan Nixon had seven receptions for 127 yards and a touchdown, freshman RB Dustin Blue caught one touchdown and ran for another, and senior RB Brandon Jenkins carried 12 times for 55 yards. The Warriors will look to get back on track with a win on the road at their rivals in the 'Battle of the Choptank'...Friday at Cambridge-SD

5. Wicomico (5-3)-The Indians fell at home on Thursday night to the Queen Anne's County Lions 35-28 in an exciting game at County Stadium in Salisbury. WiHi has lost to Decatur, Kent Island and Queen Anne's by a combined 23 points or 7.6 points per game. They will look to win the Salisbury City Championship Friday night and make a run in the playoffs...Friday at James M. Bennett

6. North Caroline (3-5)-The Bulldogs bounced back from a rough loss to Kent Island and defeated the Parkside Rams at home 43-13 on Thursday Night. Zymear Smith had 78 yards and a touchdown on seven carries, and Trent Towson rushed for 67 yards and a pair of scores on seven touches. Justice Hall (7-43) and Tyson Weber (3-31) also scored touchdowns for North Caroline (3-5). Owen Piavis returned a fumble for a touchdown. They will look to finish the season on a strong note in the Superintendent's Cup on Friday before the playoffs...Friday vs. Colonel Richardson

7. Parkside (2-6)-The Rams dropped their 6th straight game, this time to North Caroline on the road 43-13 last Thursday night. Parkside will look to end the losing streak with a 1A matchup on a short week at home...Thursday vs. Kent County

8. Colonel Richardson (6-2)-The Colonels won the Bayside 1A Championship for a 2nd straight year and they did it for a 2nd straight time defeating Cambridge-SD for the title this time 25-19 in OT. Freshman Derrick Mitchell had an 8 yard touchdown, and sophomore Carter Turbitt had an 80 yard kickoff return for a touchdown. After a 19-19 tie took them into overtime, CRHS blocked a field goal, leading to senior Cam Gondeck scoring the game-winning six yard touchdown...Friday at North Caroline

9. Cambridge-SD (4-4)-The Vikings after getting out to an early 12-0 lead ended up tied at 19 at Halftime and lost in OT 25-19 for a second straight year to Colonel Richardson with the Bayside 1A Championship on the line. A blocked FG and a subsequent TD run by Colonel in the extra period did in Cambridge. The Vikings will have a tough task and a rival in the 'Battle of the Choptank' to close out the regular season...Friday vs. Easton

10. Kent County (2-6)-The Trojans won their second in a row, this time over Washington on Thursday night 40-0. A much tougher battle lies ahead in a 2A matchup on a short week on the road...Thursday at Parkside

11. Snow Hill (2-5)-The Eagles fell on the road in a non-conference matchup to Northampton (VA) on the road 48-37...Thursday at Stephen Decatur

13. Washington (0-7)-The Jags lost on the road to Kent County 40-0, the Jags remain scoreless this season...Thursday at Arcadia (VA)