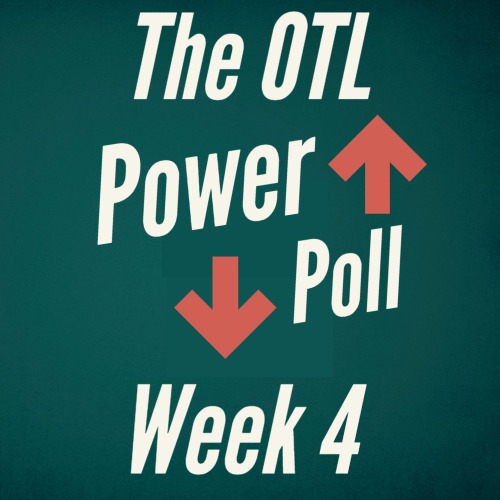 This week's Power Poll undoubtedly will bring about a lot of scrutiny. Fair enough but at the moment it's near impossible to do a ranking without criticism which makes it fun and challenging. There are just too many subjective criteria and unknowns at the moment that makes everyone happy. I have never done this one who simply has the better record. Margin of victory and loss, strength of schedule, where you won or lost, experience, youth, etc. all play into my thinking. I tried very hard not to do a lot of ties and make tough decisions.

Explanation: This week's Power Poll undoubtedly will bring about a lot of scrutiny. Fair enough but at the moment it's near impossible to do a ranking without criticism which makes it fun and challenging. There are just too many subjective criteria and unknowns at the moment that makes everyone happy. I have never done this one who simply has the better record. Margin of victory and loss, strength of schedule, where you won or lost, experience, youth, etc. all play into my thinking. I tried very hard not to do a lot of ties and make tough decisions. Here is my rationale:

-WiHi stays at #1 because despite losing at home they lost to a solid Decatur team by 1 point with a limited Leatherbury in the 2nd Half. Decatur had faced a strong rush attack the week before in Kent Island and with an extra day to prepare, DC Todd Appel was not going to let that happen again to that extent, they were ready. Let's not forget there are 5 new starters on the Wi-Hi offensive line as well even though they have played well this season. The Indians have two very solid wins on their resume in Easton and North Caroline with one of those wins on the road. I didn't feel that they deserved to be dropped down.

-Easton has wins over a 2A Kent Island at home and then a strong win at a 2A Parkside team that led QA on the road at the half 20-7. Both Easton and QA have wins over Kent County. The Warriors did not play well at all against Wi-Hi despite their talent especially on offense and good teams like Wi-Hi will do that to you. You look at Decatur with a similar offense and playmakers albeit they are a younger squad and they only scored 13, it shows the Indians have a really good defense, just ask North Caroline.

-Queen Anne's is the only 4-0 team but with two of those wins, one was a forfeit against Washington and the other a win at Kent County. The Lions had to fight back against a Caroline squad (who Wicomico defeated 42-0) at home in the 4th quarter in Week 1 and then with extra time off had to fight back in Week 3 from a 20-7 deficit at home to Parkside (who was blown out by Easton 36-7 at home). At the moment that is the reason for the drop. The schedule is not their fault but it's tough to evaluate to some extent with 2-1A wins, one of which was a forfeit (not their fault and yes, they would have won anyway). Some other teams have had a little better schedule opportunities thus far, the Lions will have their opportunities. Given the schedule and the way they won I was considering dropping to #4 but they boast arguably the Bayside's best RB, the Lions have not had the same offensive line together yet this season & it looks they won't until Week 6 and their defense outside of one bad half against Parkside has played well. They are also a young team who lost 3 players before the season started.

-Kent Island, despite playing sloppy, had a 27-point win at Cambridge after a 17-point win at Decatur the week before in which they played their best game of the season. Their other win was against Colonel, who is the current top team in the 1A and defending champs. The Bucs have yet to play a home game, keep that in mind. The feeling is though they are starting to find themselves and get on a roll. Obviously, we will learn a lot more this week in which they have their first home game which is fitting given who they are playing. Could you make an argument to tie them with QA because their 2-1A wins are against the best 1A teams? You could, yes.

-Stephen Decatur had a huge win at Wicomico on Saturday. Despite their loss to Kent Island, a win on the road at #1 Wicomico with a pretty young team that held the Indians to 12 points deserves to move up and because of that to me warrants tying Kent Island even though they lost at home to the Bucs who play WiHi on Friday. Now if KI defeats Wicomico at home, then the Bucs have the upper hand based on head-to-head. Could I have moved Decatur up higher? Maybe but one of their wins was against an 0-4 Bennett squad who lost to Cambridge at home that Kent Island defeated by 27. The other win was at home albeit dominant against a young Indian River squad who is 1-2 with a rotation of a Freshman & Sophomore QB.

1. Wicomico (3-1)-The Indians lost at home to Stephen Decatur 13-12 blowing a 12-0 lead. It was surprising to see the potent offensive attack of the Indians held at bay especially in the second half. WiHi led 12-0 at halftime on a Darius Foreman TD run late in the 2nd quarter and a Malique Leatherbury PR for a TD earlier in the half but that was all they would get. The offense threatened especially at the very end but could not score. The defense played another solid game. Leatherbury was limited in the 2nd half with cramping, not Decatur's fault but a storyline of the game. One coach described the first half as slow and sloppy. It's still a very good team who will need a bounce back win on the road in a tough one this week...Friday at Kent Island

2. Easton (3-1)-The Warriors rolled over Parkside on the road 36-7 with QB Kevin O'Connor throwing for 212 yards, 3 TDs and RB Brandon Jenkins rushing for 145 yards and 2 TDs. The defense pitched a shutout against a Rams offense that had been rolling up until that point...Friday vs. North Caroline

3. Queen Anne's (4-0)-The Lions rolled over 1A Kent County on the road 46-26 as RB KJ Smothers had another big game with 4 TDs and the defense did what they were supposed to do...Friday at James M. Bennett

T4. Kent Island (3-1)-The Bucs despite a sloppy game won on the road at Cambridge-SD 39-12. RB Kasey Heath ran for 215 yards and 5 TDs giving HC Bryon Sofinowski career win #100. The defense held Cambridge-SD to one first down in the first half and that was on a penalty...Friday vs. Wicomico

T4. Stephen Decatur (3-1)-The Seahawks pulled off the upset at Wicomico 13-12 as QB Brycen Coleman led Decatur back from a 12-0 deficit at the half. Coleman hit Luke Mergott with a TD pass and then added a 67-yard TD rush. The defense though has to be headline story, a week after Kent Island ran all over the Bucs, the Seahawks held the Indians to one score...Friday vs. Parkside

6. North Caroline (2-2)-The Bulldogs got another week of relief on the schedule after a tough start and they got their first home game of the year at the Ridge turning it into a 63-6 rout of James M. Bennett. RB Zamir Smith had multiple TDs; Trent Towson had Caroline's first score. The Bulldogs are building some cohesion, confidence and execution. The schedule ramps back up with what should be an interesting litmus test game against one of their rivals...Friday at Easton

7. Parkside (2-2)-The Rams fell to Easton at home 36-7. The defense had a tough time stopping Kevin O'Connor and Brandon Jenkins on the ground and O'Connor also through the air. The offense at times would get things going only to take a few steps back which hurt drives. The defense did not quit in the second half forcing some Warrior T.O.D's and a forced fumble turned into Parkside's lone score...Friday at Stephen Decatur

9. Colonel Richardson (2-2)-The Colonels rolled over fellow 1A foe Snow Hill on the road no less 60-28. The Colonels double wing rushing attack was on display all night long and could not be stopped. The defense constantly pressured the Eagles on pass plays. The Colonels got out to an early 22-6 lead and never looked back. It's likely it comes down to Colonel and Cambridge for the 1A or Small School title although it's still early...Friday vs. Arcadia (VA)

10. James M. Bennett (0-4)-The Clippers took one hard on the road to North Caroline 63-6 after nearly pulling off their first win in over a year the week before. It was the Bulldogs first home game in 4 weeks, and they were very battle tested. This Friday doesn't get any easier...Friday vs. Queen Anne's

11. Snow Hill (1-3)-The Eagles were handled at home by Colonel Richardson 60-28. The Eagles run defense had little answer for the Colonels rushing attack all game long. They didn't quit and put 28 points to their credit but that's two 1A losses that takes them likely out of contention for a Small School Bayside or 1A title but still over half the season is left...Friday vs. Nandua (VA)

12. Kent County (0-4)-The Trojans fell to the Queen Anne's Lions at home 46-26. Many of the Lions starters were out of the game by the time the Trojans scored the majority of their points. A tough start to the season but part of that has to do with playing some good 2A teams...Friday vs. Cambridge-SD

13. Washington (0-4)-The Jags fell 40-0 in a shortened game to Nandua (VA)...The Jags are still looking to score their first points of the season...Bye