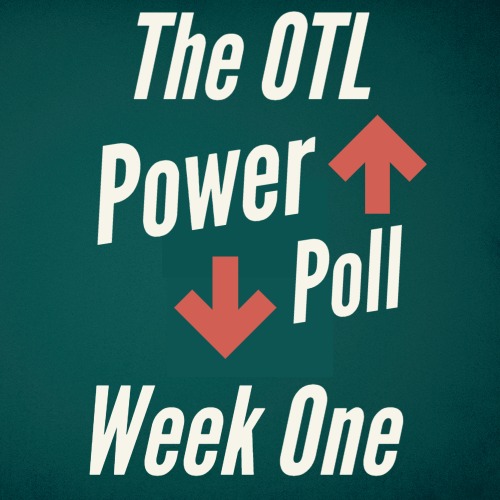 Mike Bradley's Week One Power Poll is out. Who moved up and who moved down? Check it out by reading more below.

The Week One Power Poll

1. Queen Anne's (1-0)-Star RB KJ Smothers delivered especially in the 2nd half including in the clutch for the Lions who came from behind to defeat North Caroline. Not a surprise the Lions got a tough game from the Bulldogs but the fact that they trailed 16-7 in the 4th Quarter at home certainly will have the players attention this week at practice despite the win. This was definitely a game that yielded great experience for the younger players and was a huge program builder...Friday at Washington

2. Wicomico (1-0)-The Indians were able to ease into their first game with a blowout win at home against Washington which was expected. However, this week will be great test for them and a chance to make their first statement of this new season. (Note from last week's preview capsule: I am told despite O-Line Coach Colliton's departure to SU which was a loss to the staff, WiHi Football alum Eric Phillips was technically the O-Line coach last season being overseen by Colliton who he played for. Phillips has been on the staff for 6 years.)...Thursday vs. North Caroline

3. Easton (1-0)-The Warriors weren't perfect but the defense played very well, and the offense was opportunistic and made some explosive plays as they are capable. Easton proved they are capable of better than last fall. This is where I probably should have put them pre-season but now, they earned it...Friday at Kent County

4. Kent Island (0-1)-A tough opening road loss to Easton but I don't think anybody believes that the Bucs won't get better as the season goes on. They have a lot of work to do but they also played a very good opponent keep in mind...Friday at Colonel Richardson

5. Stephen Decatur (1-0)-The Seahawks rolled in their opening season game on the road against a James M. Bennett squad rebuilding for a second straight year. A good start for a fairly youthful roster. The competition gets ratcheted up this week though...Friday vs. Indian River, DE

6. North Caroline (0-1)-It's hard not to want to push these guys up a spot despite their loss on the road to Queen Anne's. Frankly 4-6 is pretty interchangeable at this point if you ask me. Even with the loss that game clearly showed the Bulldogs are a team to be reckoned with this year and while they may not be rolling off 9 or 10-0 seasons anymore, they should win their fair share of games and that includes an upset win more than likely...Thursday at Wicomico

7. Parkside (1-0)-The Rams got an early game from the Eagles but used their run game including a large stable of running backs and ran away with the game. A good start for the Rams who got the perfect combination of competition and then building confidence with production and success. They turn right around with a Salisbury City Championship game already...Friday vs. James M. Bennett

8. Cambridge-SD (0-1)-The Vikings fell to a solid non-conference opponent in Milford, DE. HC Toby Peer told me that they were just the better team, and the Vikings did not beat themselves. He remained optimistic and his team is now battle tested and going against a more equally matched 1A opponent this week...Thursday at Snow Hill

9. Colonel Richardson (0-1)-The Colonels had a tough non-conference opponent to start the season in Seaford, DE and HC James Jackson said they didn't do much of anything well and TOs certainly did not help. They have a hungry and likely angry opponent coming to town this week but at least they are Week #1 battled tested...Friday vs. Kent Island

10. James M. Bennett (0-1)-Tough first game to start the season even though Decatur has a lot of youth this season and a new QB. HC Jake Coleman did say the Clippers look better and ahead of where they were last year at this time. The Clippers in another rebuild this season with a new HC won't have it much easier this week...Friday vs. Parkside

11. Snow Hill (0-1)-The Eagles hung early with Parkside but ultimately gave a up a lot of yards on the ground to the running attack of the Rams and could never recover. The Eagles still looking to compete in more of these games for 3 or 4 quarters as compared to a half...Thursday vs. Cambridge-SD

12. Kent County (0-1)-A tough blowout loss on the road to Bo Manor that wasn't seen coming. The Trojans are going through transition in some ways but do have a fair number of seniors and numbers overall. It will not be easy looking for their first win this week even though the game is at home...Friday vs. Easton

13. Washington (0-1)-A very tough opener to start the season against Wicomico, you can't really judge a whole lot with the Jags when we knew going in the programs were polar opposites. The problem is Week 2 doesn't get any easier at all...Friday vs. Queen Anne's