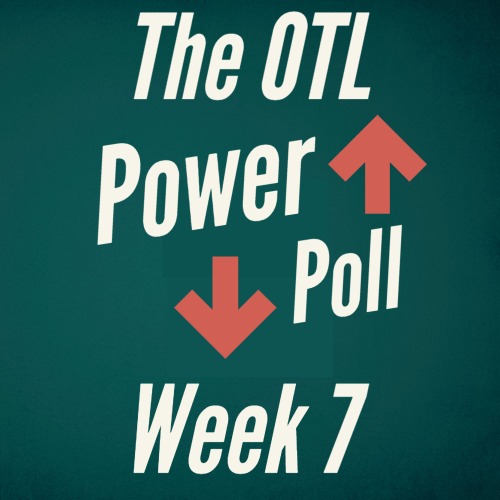 The Top 5 remained the same with all but one team winning and that was Decatur. You could make an argument with the quality win QA had over Decatur to possibly tie them with Easton, but Easton won the head-to-head and had stronger wins over like opponents. It's obviously very close though between both teams. This Thursday and Friday will determine a lot with QA at WiHi and Easton hosting Decatur.

Explanation: The Top 5 remained the same with all but one team winning and that was Decatur. You could make an argument with the quality win QA had over Decatur to possibly tie them with Easton, but Easton won the head-to-head and had stronger wins over like opponents. It's obviously very close though between both teams. This Thursday and Friday will determine a lot with QA at WiHi and Easton hosting Decatur.

I tied Colonel with Cambridge. I had Cambridge ahead in the pre-season poll with the amount of graduation and historic year Colonel had last year thinking they would be competitive but likely drop off some this year. That has not happened. They have one more win and have won 5 in a row. Their wins over 1A opponents have been similar to Cambridge. The two of them will settle it this week. However, these two teams are very close.

With Kent County's large margin win at Snow Hill, I propelled them over Snow Hill even though Snow Hill has one more win than they do. Kent also played Colonel and Cambridge very close which Snow Hill did not. Also, I dropped Bennett down to 12th given the KC win. Again, some of this is subjective but at some point you have to reward winning. One of Bennett's losses did include a loss 1A Cambridge who KC also played tight.

1. Kent Island (6-1)-The Buccaneers, while having some penalty issues and some sloppiness of their own, took advantage of 5 North Caroline TO's and won handily 35-7 over the Bulldogs on the road. RB Kasey Heath ran for 234 yards and 2TDs and Keegan O'Brien rushed for 80 yards and had a TD reception. Lloyd Price had 2 Ints. The Bucs have the longest winning streak in the Bayside at 6. The Bucs get an extra day to prepare for this week's game on the road in Salisbury...Saturday at James M. Bennett

2. Easton (6-1)-The Warriors blew out James M. Bennett at home 49-13. QB Kevin O'Connor had two of his three TD passes go to Chase Raab and the other to Chris Baynard. Brandon Jenkins, Jordan Nixon and Dustin Blue also had TDs...Friday vs. Stephen Decatur

3. Queen Anne's (6-1)-The Lions bounced back from a tough loss at home to Easton last week and had a strong win at home over Stephen Decatur 46-28. QA was led by RB KJ Smothers who rushed 50 times for 353 yards and 4 TDs nearly duplicating his performance a week ago against Easton. Ashton Siwald also had 2 TDs in the win. Jai Roy had two sacks and a forced fumble, Siwald had six tackles, and safety Sam Miller had an interception. This game was close until midway to later in the 2nd half QA, with the lead, recovered an onside kick after a score and turned it into more points to pad the lead...Thursday at Wicomico

4. Stephen Decatur (5-2)-The Seahawks fell on the road to Queen Anne's 46-28 in an exciting game in Centreville. Nate Tapley got the start at QB with Brycen Coleman moving back to WR although Coleman got time at QB. Tapley had a TD run, Luke Mergott had KO Return for a TD, Brogan Eastlack hit a couple of FGs all a part of the scoring for the Seahawks. The Decatur defense could not stop RB KJ Smothers who had over 300 yards rushing and 4 TDs, dominated once again. This game was close for about 3.5 quarters...Friday at Easton

5. Wicomico (5-2)-The Indians defeated Parkside in one of the Salisbury City Championship games 48-20 on Thursday night winning their second in a row and adding a 2A win to their resume as they look to finish the season strong. They have a chance at some redemption this week in their matchup after losing to strong 2A teams Kent Island and Stephen Decatur earlier this season...Thursday vs. Queen Anne's

6. North Caroline (2-5)-The Bulldogs played very sloppily including having 5 TOs in the games that led to several KI short fields in a 35-7 loss. After a strong game at Decatur the week before Caroline took a step backwards with their young squad...Thursday vs. Parkside

7. Parkside (2-5)-The Rams dropped their 5th straight game this time to Wicomico on Thursday night in one of the Salisbury City Championship games 48-20. The Rams played tough in the game but did not have enough to stop or score enough to pull off the upset...Thursday at North Caroline

T8. Colonel Richardson (5-2)-The Colonels won their fifth game in a row this time to Nandua (VA) 27-12. Colonel got out to a 20-0 lead midway through the 2nd but allowed Nandua through poor play to get back in the game but they rebounded and went on to win. They will defend their Bayside 1A or Small School Championship this Thursday...Friday at Cambridge-SD

T8. Cambridge-SD (4-3)-The Vikings won by way of a Washington forfeit. The Vikings will try to get back the Bayside 1A or Small School championship this Thursday after not winning it for the first time over 10 years to Colonel last season...Friday vs. Colonel Richardson

10. Kent County (1-6)-The Trojans captured their first win of the year, a 49-26 win at Snow Hill. After losing in close games to Cambridge and Colonel in back to back weeks the Trojans pushed through in their biggest offensive performance of the year. The Trojans threw in some wrinkles with some Jet Option, Dives and Sweeps to keep SH off balance...Thursday vs. Washington

11. Snow Hill (2-5)-The Eagles fell at home to Kent County 49-26 in a game that was close early on but saw the Eagles young defense struggle again. Collick, Fields and Davis were among those that scored for the Eagles in the loss...Friday at Northampton (VA)

12. James M. Bennett (0-7)-The Clippers fell on the road to Easton 49-13 and remain along with Washington as the remaining winless teams in the Bayside...Saturday vs. Kent Island

13. Washington (0-6)-The Jags forfeited for the second time this season, this time to Cambridge-SD...Thursday at Kent County