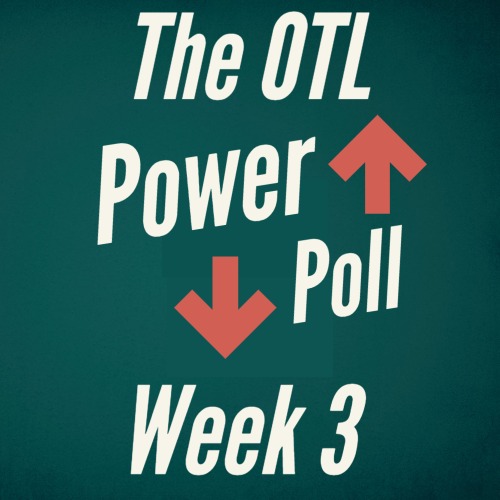 Three games are in the books and just two teams remain unbeaten! How does that shake-up Mike's Power Poll? Click below to get the complete look at how things have changed.

Another week of high school football has come and gone. Some looks the same while others have changed. Agree with me? Disagree? Either way, I would love to hear your comments at mike@shoresportsmd.com

1. Wicomico (3-0)-The Indians more than reinforced that they are the top team in the Bayside with their 44-14 win over Easton on the road. QB Darius Foreman had 4 passing TDs and 2 rushing TDs in the victory. While the offense looked explosive, the defense was equally as impressive shutting down the Warriors attack often with just an even front on the defensive line. They will look for another statement win this week against a team they defeated last year on the road during the regular season in a thriller but lost by FG to at home in the playoffs...Saturday vs. Stephen Decatur

2. Queen Anne's (3-0)-The Lions did it again, this time coming back from a 20-7 deficit at the half and defeating Parkside at home on Homecoming 38-26. RB KJ Smothers worked his magic again in the 2nd half rushing for 4 TDs (5 total) and over 300 yards on 35 carries. Ashton Siwald had 11 tackles and a key pass breakup late in the 4th quarter. Smothers, one of the few true veteran players on the roster, is a big reason why this young team that has been slow out of the gates has been able to overcome slow starts. Credit the Lions though for making adjustments and playing lights out in the 2nd half. Can they continue slow starts and win is the question...Friday at Kent County

3. Easton (2-1)-The Warriors were rolled by Wicomico at home 44-14. The defense could not contain or minimize the damage from Malique Leatherbury or Darius Foreman. The offense was also stymied and hurt themselves with 3 possessions in the Red Zone coming away with 0 points. Dropped passes was also a big issue...When they look back they will also see they did not play one of their better games (really good teams can do that to you) although the outcome likely would not have changed...Friday at Parkside

4. Kent Island (2-1)-The Bucs as predicted had a growth game in the trenches running the ball successfully with the other top back in the Bayside, Kasey Heath who had multiple TDs. Kent Island also took advantage of 3 Decatur TOs to the tune of 17 points winning 31-14 in a nice road win...Friday at Cambridge-SD

5. Stephen Decatur (2-1)-The Seahawks could not stop the Kent Island running game led by Kasey Heath and turned the ball over 3 times netting the Bucs 17 points. It was certainly a learning experience for the young Decatur squad. They won't have much time to lament the loss with another big game coming up this week...Saturday at Wicomico

T6. North Caroline (1-2)-The Bulldogs finally got some relief after a brutal start to the schedule after playing at Queen Anne's and then at Wicomico on a short week. Getting the 1A Trojans albeit on the road for a 3rd straight week was just what they needed and they rolled 42-6. The Bulldogs were able to show some improvement especially on offense with a young team getting down the nuances of the Wing-T offense...Friday vs. James M. Bennett

T6. Parkside (2-1)-The Rams came to play and got out to a 20-7 lead at Queen Anne's only to have KJ Smothers ruin their 2nd half with 4 of his 5 total TDs. The Rams offense was held to just 6 points in that 2nd half as well. That said, give credit to Parkside who had more and wear tear on them after playing Bennett on Friday and having to make the long trip to Centreville. QA also had extra rest and time to prepare yet the Rams gave the Lions a game for 3 quarters +. This is an improved team from last year but the run defense right now has to be a concern for the Rams as it was last season. The offense has found balance and shows plenty of creative run game multiplicity. Despite the loss they deserve at least a slight move up this week...Friday vs. Easton

8. Cambridge-SD (2-1)-The Vikings down 15-0 came back and defeated James M. Bennett on the road 18-15 defeating the Clippers for a 2nd straight year.  The Vikings took advantage of late turnover on a victory formation type play by Bennett and capitalized a few plays later with no time remaining. A Talen Middleton TD pass to Darren Belizaire (who had a TD pass to Tasher Drummond earlier in the game) was the game winner. That is a program building win for the Vikings who have a tougher test this week...Friday vs. Kent Island

9. Colonel Richardson (1-2)-The Colonels got off to a slow start but played a much better 2nd half and soundly defeated Washington 44-0. Senior Cam Gondeck, junior Will Simmons, sophomores Collin Brewer and Dylan Cecil, and freshman Cha'tydrick Pickrom each had rushing touchdowns.  Junior Brayden Dadds completed a 20 yard pass to senior Chandler Tindall for a touchdown as well.  Senior Ashton Vail was 4 for 5 on extra points and completed a 20 yard field goal. After taking their lumps the 1st two weeks the Colonels played more like competition and they got off to a good start in the 1A. They will get a much stiffer test this week...Friday at Snow Hill

10. James M. Bennett (0-3)-The Clippers had a heartbreaking 18-15 loss at home to Cambridge-SD blowing a 15-0 lead. A late fumble out of a victory formation gave the Vikings new life who made the most of it, scoring with no time remaining. The Clippers though are showing definite signs of progress which is great news after a winless season last year. This week will be tough but also another opportunity to get better and keep positive momentum in the program...Friday at North Caroline

11. Snow Hill (1-2)-The Eagles got their first win on the road taking down Arcadia, VA on the road 42-6. Coach Deitrick Downing told me they have lofty expectations this year to win 6 games and win the 1A. They lost to 1A Cambridge last week so they will need to get to work with a big game this week in the 1A...Friday vs. Colonel Richardson

12. Kent County (0-3)-The Trojans lost a tough one to North Caroline at home 42-6. It's been a rough start to the year for a team that is still very young and gaining experience...This week they will face their toughest opponent this season...Friday vs. Queen Anne's

13. Washington (0-3)-The Jags who forfeited their game against Queen Anne's the week before had extra time to get healthy and plan for a similar school in 1A Colonel Richardson. None of that ended up mattering as they fell 42-0. The Jags have not scored a point yet this season. Another tough year of sledding for the Jags. Give them credit for coming to play and representing their school...Friday at Nandua (VA)