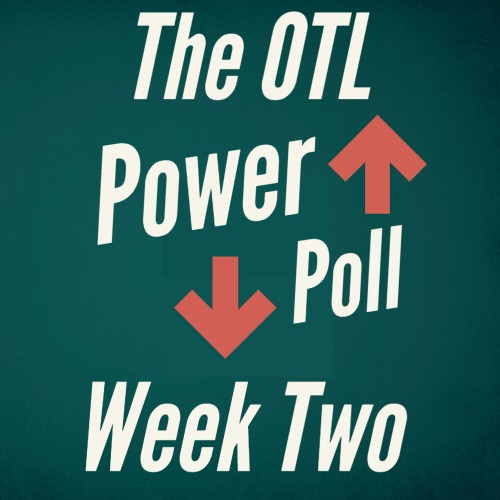 A little shake-up in this week's OTL Power Poll. Check it out below

Queen Anne's won by forfeit and WiHi was impressive in their win over North Caroline. That was enough for Mike to move the Indians to the number one spot. Agree? Disagree? send your thoughts to mike@shoresportsmd.com

1. Wicomico (2-0)-The Indians had a big statement win last Thursday night at home against North Caroline 42-0. WR Malique Leatherbury accounted for 4 TDs. Since Wi-Hi and Queen Anne's had head to head competition both at home and both had Washington wins (QA would have won the game even w/o the forfeit), the Indians deserve to be bumped up as the top team...Friday at Easton

2. Queen Anne's (2-0)-The Lions received a forfeit win from Washington. The drop down is not a knock on the Lions but just how strong the Indians played against a common opponent compared to QA. The Lions are still a very good team albeit young in many places and they will have a chance to get another quality win in their next game...Saturday vs. Parkside

3. Easton (2-0)-The Warriors rolled over Kent County 42-7 on the road despite a not so good week of practice according to HC Matt Griffith. They did not overlook the Trojans to their credit on game day. The task gets much tougher this week with one of the "Games of the Week". Easton will have another chance to win against a quality program and make another statement in the Bayside that they are more the Spring '21 team than Fall '21 team last season...Friday vs. Wicomico

4. Stephen Decatur (2-0)-The Seahawks rolled again this time against rival Indian River out of Dagsboro, DE. QB Brycen Coleman accounted for 4 TDs. The competition elevates again this week and at home where they play very well...Friday vs. Kent Island

5. Kent Island (1-1)-The Bucs bounced back to get their first win of the year over Colonel Richardson. The competition gets a lot tougher again this week. We should get a good idea in seeing how the Bucs are progressing with a very inexperienced team...Friday at Stephen Decatur

6. North Caroline (0-2)-The Bulldogs took it on the chin to Wicomico last Thursday night. The game was 20-0 after 3 to give some perspective but the Indians poured on 22 points in the 4th Quarter. Yes you could make an argument to drop these guys down but given the fact they have had the toughest schedule to start the season so far with both games on the road I will cut them a break. One of those two games they led 16-7 in the 4th Quarter...Friday at Kent County

7. Parkside (2-0)-The Rams are off to a good start this season with a win in the Salisbury City Championship Game 35-12 over Bennett. The Rams continue to run the ball well but the surprise is their passing game that they have been going to at times and that has been highly productive. QB Luke Maciarello had 3 TD passes this past Friday night. Their toughest game of the year awaits them this week however...Saturday at Queen Anne's

8. Cambridge-SD (1-1)-The Vikings bounced back from a Week 1 loss to a better Milford, DE team to take down similar 1A team Snow Hill 48-12 last Thursday night where they ran the football well. This week they play a 3A team that they defeated last year...Friday at James M. Bennett

9. Colonel Richardson (0-2)-The Colonels start to the season is very similar to last year where they took their lumps early against bigger schools and better teams. This season they played Seaford, DE to start the year and then Kent Island this past Friday losing 42-7. They will play a similar 1A team this week and see if they can't reset the season...Friday vs. Washington

10. James M. Bennett (0-2)-The Clippers start to their schedule has not been an easy one and after Decatur in Week 1 they then played Parkside in Week 2 in one of the Salisbury City Championship Games and fell 35-12. They play a 1A last week but lost to them last season...Friday vs. Cambridge-SD

11. Snow Hill (0-2)-The Eagles playing more of their type of team in Cambridge last Thursday still gave up too many yards on the ground and led to a sizeable margin loss 48-12...Friday at Arcadia, VA

12. Kent County (0-2)-The Trojans start to the season has been tough as they have scored just 7 points in two games and given up 90 points. The task doesn't get any easier this coming week...Friday vs. North Caroline