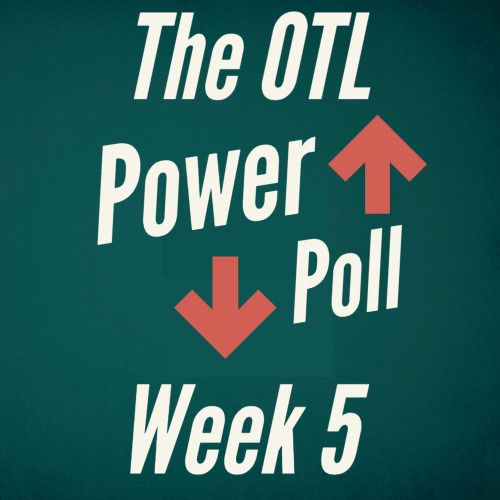 This week's Power Poll has a lot more clarity after Kent Island defeated Wicomico and Easton defeated North Caroline. At this point with 4 straight wins and two against top 5 teams in Decatur on the road and at home against then #1 Wicomico (and the way they did it against the Indians especially in the first half) has me boosting Kent Island to the top. Frankly I could have tied them for #3 last week with Queen Anne's but had to acknowledge two wins were against 1A teams (albeit good ones in 1A) and the loss to Easton on the road Week #1.

Explanation: This week's Power Poll has a lot more clarity after Kent Island defeated Wicomico and Easton defeated North Caroline. At this point with 4 straight wins and two against top 5 teams in Decatur on the road and at home against then #1 Wicomico (and the way they did it against the Indians especially in the first half) has me boosting Kent Island to the top. Frankly I could have tied them for #3 last week with Queen Anne's but had to acknowledge two wins were against 1A teams (albeit good ones in 1A) and the loss to Easton on the road Week #1.

...Easton is #2 because they got Wicomico at home and were blown out even though they did beat KI at home. I thought the Bucs deserved to leapfrog the Warriors with the win Friday and a strong win at Decatur a few weeks ago. The Warriors could make an argument to be tied for #1 but I am really trying to avoid ties. Easton still is ranked above QA's because they did not struggle and led the entire way at home against North Caroline. They also won convincingly on the road at Parkside, two opponents Queen Anne's had to come from behind at home to defeat. They both have defeated Kent County and Easton has the Week #1 win over Kent Island, the current #1 so I feel sound in doing so.

...Queen Anne's is the lone undefeated team and there is certainly something to be said about that. The schedule is primarily why they are at #3, not their fault at all but still a reality in rankings that I have to consider. The Lions schedule the rest of the way is very difficult and will give them more than ample opportunity to jump to #2 and #1 in the weeks ahead with wins. This week they take on #2 Easton at home.

...Stephen Decatur is having a nice start to the season and I think I could have tied them with QA. I likely would have if Wicomico had defeated Kent Island this past Friday or if the game was close. Regardless of ranking, this young team has learned how to win. I think their best ball is still in front of them. It seems like they are committed to running more this year and why not with QB Brycen Coleman. They will still pass plenty. This team will of course be a factor in the weeks to come.

1. Kent Island (4-1)-The Buccaneers are the new #1 after their win Friday night at home over then #1 Wicomico 28-13 giving them their 4th straight win. The Bucs came out playing with their hair on fire in the first half. They were able to hold off a comeback from the Indians in the 3rd Quarter and finish strong. RB Kasey Heath had 4 TDs in the win...Friday at Parkside

2. Easton (4-1)-The Warriors defeated North Caroline at home 33-20. Easton was able to get out to a quick 14-0 lead thanks in part to a Caroline fumble deep in their own territory already down 7-0. Another Caroline fumble later in the game was capitalized on by the Warriors as well. QB Kevin O’Connor carried the ball 25 times for a season-high 176 yards and two touchdowns, and completed 13 of 31 passes for 140 yards and 3 TDs...Friday at Queen Anne's

3. Queen Anne's (5-0)-The Lions remain the lone undefeated team in the Bayside with a 46-6 win on the road at James M. Bennett. RB KJ Smothers had multiple scores in the win as the defense pitched a near shutout...a big game this week for the Lions as the schedule becomes a behemoth starting Friday...Friday vs. Easton

4. Stephen Decatur (4-1)-The Seahawks defeated Parkside at home on Thursday night 28-7. TE/RB Luke Mergott had two TDs. QB Brycen Coleman and RB Caden Shockley had good nights on the ground. The Decatur defense outside of a few drives including the first one held the Rams ground attack in check...Friday vs. North Caroline

5. Wicomico (3-2)-The Indians fell for a second straight game, this time to Kent Island on the road 28-13. The run defense could not stop the Bucs running attack of Kasey Heath. Offensively QB Darius Foreman was given limited opportunities to run the ball (WiHi said some blocking issues they were having.) The pass game did not connect on any big plays. Malique Leatherbury was not much of a factor. Special teams plagued the Indians on KO return especially in the first half. They played much better in the second half but it was too little too late...Friday at Cambridge-SD

6. North Caroline (2-3)-The Bulldogs fell on the road to Easton 33-20. Fumbles, poor field position and lack of physicality did in Caroline in the rain on Friday who got down early 14-0. To their credit they came back to make it a 1 point game but the Warriors would pull away for the win...Friday at Stephen Decatur

7. Parkside (2-3)-The Rams dropped their 3rd straight as they fell to Stephen Decatur on the road 28-7 last Thursday night. The offense had a tough night after a promising opening drive resulted in a TOD. The defense hung in and made some stops for the offense especially in the first half but ultimately could only hold for so long...Friday vs. Kent Island

8. Cambridge-SD (3-2)-The Vikings defeated Kent County on the road last Thursday in a 1A matchup 16-6. HC Toby Peer while happy with the win said they left a lot of points out on the field and could have played better...Friday vs. Wicomico

9. Colonel Richardson (3-2)-The Colonels rolled over Arcadia (VA) 45-6 in a non-conference game on homecoming...Sr. RB Cam Condeck had 3 TDs to lead the way in the win, Srs. Austin Alexander and Will Thomas each had a 1TD...back to Conference play this week and a 1A matchup...Friday at Kent County

10. James M. Bennett (0-5)-The Clippers were defeated at home by Queen Anne's on Friday 46-6. It continues to be a building and learning experience for Bennett this season...Friday at Southern-AA

11. Snow Hill (1-4)-The Eagles fell at home to Nandua (VA) 35-0 in a non-conference matchup last Thursday. The defense continues to struggle. They will get a chance to redeem themselves Friday in a 1A matchup...Friday at Washington

12. Kent County (0-5)-The Trojans fell at home last Thursday to Cambridge-SD 16-6. KC still looking for their first win but one opposing Coach tells me they are playing better. They will have another big 1A opportunity this week...Friday vs. Colonel Richardson