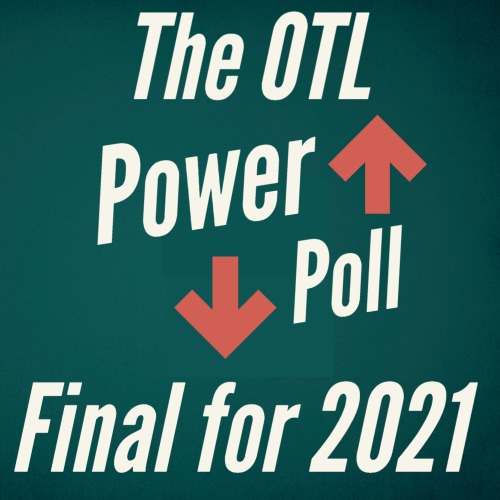 Mike Bradley has shared his final OTL Power Poll of the 2021 Football Season. There is a lot of information here to absorb and gives us something to look forward to for the 2022 season.

*Explaining the Poll and More: This final poll has playoff games included in them. For those that know me I dislike straddling the fence on opinions and questions posed to me. However, given how close Decatur and WiHi played each other and the fact that they each won against each other on the road, it’s tough for me to rank one above the other. You could argue that the playoff game is bigger than the regular season matchup so if you go by that criteria than you lean Seahawks. The case for the Indians, they had two more wins and their 1A matchup against Colonel was tougher than Decatur’s against Snow Hill…This was truly one of the better seasons of football in the Bayside and I am already looking forward to next season!

1. Kent Island (10-1)-The Bucs had their first undefeated Regular Season since 2012 and won the Bayside 3A/2A Championship. Head Coach Damien Ferragamo got all he could out of this veteran crew, and it took them to the State Quarterfinals where they came up short to Douglass-PG 20-14. The Bucs have a lot to be proud of, now the question is whether Coach Ferragamo returns or goes out with the Seniors of which there are many graduating. If this is the end of the line no one can say that Ferragamo did not fill Bryan Sofinowski’s shoes very well. He kept the rich Bucs tradition going strong. Then the question is who takes up the mantle going forward?

T2. Wicomico (9-2)-The Indians had the most wins and added one more since 2012. They made the playoffs and won their first playoff game for the first time since 2012 as well. Head Coach Isaiah Taylor and his staff’s hard work over the last few seasons has paid off with a strong Spring followed by an excellent Fall. Wi-Hi lost in a thrilling 1st Round Playoff game against Stephen Decatur at home in the closing seconds 30-27. The South has needed other programs outside of Parkside to step up and Wi-Hi along with Decatur has done just that. There is usually talent at WiHi, it’s putting it altogether and they did that this year. This year will be tough to match but next year’s team ought to once again be one of the top teams in the Bayside.

4. North Caroline (5-5)-The Bulldogs did not have the success in the Spring and Fall that they had from 2015-2019 but that kind of success does not last forever and is tough to match each season. Also, with teams like Wicomico and Stephen Decatur getting much better the 2A East got tougher too. That said the Bulldogs led by HC James McCormick still had themselves a good season and the staff got about as much as they could out of this roster including winning a road playoff game. With the retirements of Asst. Coaches Colin Joseph and Jody Ward right after the season, the question now is will McCormick also leave with them and hang up his whistle. If so, it will be the end of a long and accomplished era of McCormick’s having run the program and leaving big shoes to fill. You also wonder about the effects on the program going forward.

5. Queen Anne’s (5-3)-HC Al Waters got this young Lions team on a 5-game winning streak after a tough matchup Week #1 at North Caroline that included a 1-point win at Decatur. Queen Anne’s showed themselves as a team to be reckoned with in 2022. They did not finish the season the way they would have liked in the first round of the playoffs that Decatur again losing 42-6 but it was a tough ask expecting that twice on the road but provided an invaluable learning experience. They did what I expected and that was to show well, build momentum and get better as the season went on. They had some tough losses but that was to be expected along the way as well. Queen Anne’s will undoubtedly be one of the top pre-season teams for next year.

6. Easton (3-6)- After winning all their games in the Spring it was a tough Fall for the Warriors who did not live up to expectations. Too much inconsistency this season despite a lot of talent. The defense gave up 14 more points on average per game and the offense had some TO issues in some games. Both times against an excellent Wicomico team they got down early but fought hard, came back, and made it game which showed the talent they possessed. They almost upset Kent Island on the road in Week #1. They will have to do some searching and make some fixes in the offseason. No reason the team cannot be good next season.

7. Colonel Richardson (8-4)-The Colonels historic season ended 42-20 in the Quarterfinals against Edmondson-Westside in Baltimore. Despite the loss it was a banner year for Colonel having won 6 straight at one point (probably also a program record), they defeated Cambridge for the first time since 2005 and won the 1A Bayside Championship for the first time we are told since 1981. It is the most wins in a season in at least 17 years. They also won their first ever playoff game and hosted two playoff games for the first time in program history. Colonel has gotten progressively better over the last 5 last years but this was their best season. Head Coach James Jackson has continued the work that he as an Assistant to Dan Magnum helped build and this season took it to the next level. He deserves all the ‘Coach of the Year’ honors he has received including from us.

8. Cambridge-SD (5-5)-The Vikings had a rollercoaster ride of a season however despite the challenges that we have talked about many times already and others we have not the Vikings finished the season strong upsetting 2A Parkside in the 1st Round of the Playoffs on the road and giving 2A Harford Tech fits on the road before succumbing to them 27-17. One would expect once the transition with a new coaching staff continues to settle in and the program has had a full off-season with the new staff that next season, they should hit the ground running and compete for a Bayside 1A Title again.

9. Parkside (4-5)-The Rams kept their regular season winning seasons streak since 2014 alive with a .500 record. It’s tough to keep that going year after year as programs can go in cycles or at least have one poor year here and there. The 2A East also got better this year. That said clearly Parkside would have liked to have done better and what stings is the loss to 1A Cambridge 24-12 in the 1st Round of the Playoffs at home. There is plenty of promise for the 2022 squad who will undoubtedly learn from this season to apply to next.

10. Snow Hill (3-6)-The Eagles had one of the best seasons in a while with 3 wins (the most since 2012 when they had 6) which really should have been 4 (we have already explained why several times). You couple that with being able to get some playoff experience (loss to Bo Manor 1st Round 41-14) and you have to feel good about the 2021 campaign. Can they match it and exceed it next year will be the question?

11. Kent County (2-8)-As expected, it was a learning and development season for Kent who has a very young team. They will look to continue to progress next year and add some wins to that column and be more competitive. Getting an extra game in the playoffs (loss to Surrattsville in the 1st Round 35-12) was an added value experience.

12. James M. Bennett (0-8)-The Clippers had one of the toughest years in program history but it wasn’t for a lack of trying. Several factors conspired against them. Their season ended in the first round of the playoffs to Long Reach 48-8. With no JV team this season the concern is at least the short-term future success of the program coupled with losing 13 Seniors.

13. Washington (0-8)-A rough year for Washington going winless and not scoring a point. They did not play in the spring, but the good news is they fielded a team, they played, they got another game in with their first-round playoff matchup against Colonel and they had a lot of sophomores that will be experienced Juniors next season.

*Questions, comments, and more is welcome at mike@shoresportsmd.com